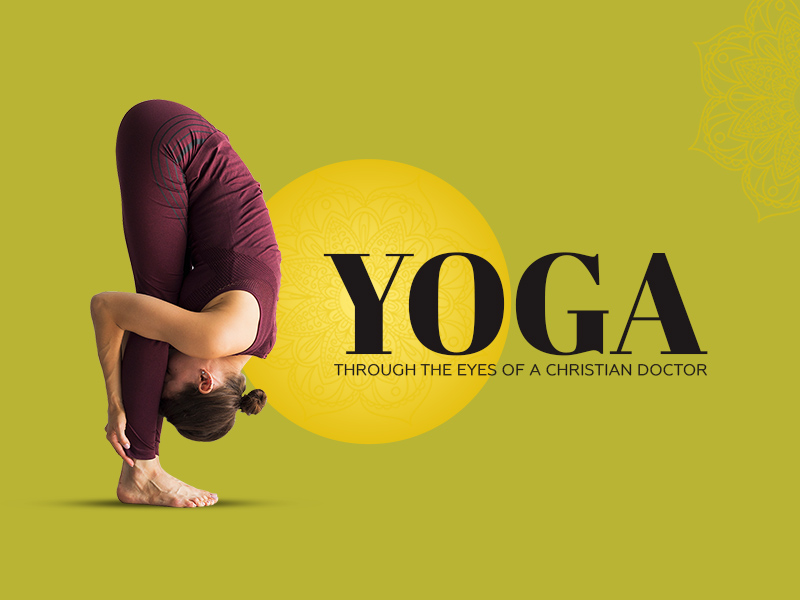 23 Dec Yoga – Through the eyes of a Christian Doctor

This is an Awareness article for Christians on Yoga

In the olden days, highly contagious infectious diseases like cholera, dysentery, pneumonia were prevalent among the populations. But, nowadays we hear a lot about diseases related to the human life style such as diabetes, high blood pressure, cancer, heart-attack and depression.
Unprecedented growth in the medical science and innovations in the information technology increase the gap between the doctor and the patients… increase the medical expenses… At times even with the abundance of money to spend for medical treatment, when the doctors give no hope for life, the number of people who look for alternative medicines is being increased day by day with the expectation to get solution in whatever the way.
One third of the outpatients in hospitals do have the physical problems caused by mental problems only. In this context, it is not a surprise that they are encouraged to seek at the alternative medicines.  There are more than 20 alternative medical methods such as Yoga, Transcendental meditation and so on. The limitations in the Allopathic medicine could be a reason for the growth of Yoga like alternative medicines.

The word “Yoga” comes from the Sanskrit language which means “to join”. Human effort to connect the human with God through asanas and breath exercises is called as yoga. Yoga is considered as basically a scientific art to maintain the physical and mental health, personal behaviour, life style and self improvement tool, thus it has different explanation from different people. A popular opinion about yoga is that it is a good weapon to fight against the social challenges such as mental restlessness, mental depression, busyness, work pressure, food contamination, environment, and media impacts.
Many of us think that yoga is just an ordinary physical exercise to relax the muscles and to increase the strength. But it is centered on the philosophical thoughts beyond exercises. According to the Pathanjali yoga sutra, which was formulated in 150 B.C, there are eight components such as Yamas,  Niyama, Āsana, Prāṇāyāma, Pratyāhāra, Dhāraṇā, Dhyāna, Samādhi. However, in later days in the 15th century Hatha Yoga emerged, which contains only two components such as Asanas (body positioning) and Pranayama (breathing exercise). This Hatha Yoga tactfully avoids the philosophical and logical questions raised by other religions and becoming very popular across the world.

Obviously, Yoga is against Christian philosophies. We just read that the yoga is an effort to connect human being with the divine. About God, there are great differences between yoga and Christianity. According to Hinduism which has three hundred and thirty millions of gods, all that we see are divine. It says god is not a personality but one who is omnipresence as a spiritual matter. But Christianity clearly says that God is the one who has personality, created the universe and everything in it with his word and the mankind.
Even about human being, there is a big difference between them. According to yoga, since all we see are divine and human can attain the divine status through asanas and pranayamas. This is something similar to what the Satan said to Eve deceiving her, “you will be like God, knowing good and evil” (Geneses. 3:5). But according to the Bible, human being is the creation, created in the image of God, and the creator and creation can never become one.
Yoga says that the reason for all kinds of human problems is because man has not yet discovered his divine status over his basic problem and the solution for it. But according to the Bible, human sinful nature is the reason for all of his problems; only the blood of Jesus Christ could remove all his sins and cleanse him. This is God’s gracious gift to human, which cannot be attained or earned by any means. Yoga teaches to focus on one’s self rather than to focus on the one true God. Yoga encourages man to seek his own conscience than to access Bible to find solutions for the difficult life questions.

What is wrong in it?

Whatever you say against yoga, in some ways yoga gives benefits to human; then what is wrong in it? Some of us say what is wrong in it if we just observe the yoga asanas and exercises by simply neglecting the philosophical aspect. This cannot be right as we just read ahead.
All types of yoga are spiritual exercises. Every yogasana is a worship form of a Hindu deity. We cannot separate asanas and exercises from its spiritual element. On this, ‘Hinduism Today’ (April – June 2003) magazine has published its displeasure that, “Separating hatha yoga from Hinduism is a deception. Many yoga teachers do not know that its roots are in Hindu religion and its spiritual purpose.”
When diseases are healed by the grace of one true God, we have to accept that even with evil power diseases can be healed. “No wonder, for Satan himself masquerades as an angel of light” (2 Cor. 11:14).  So simply by healing diseases one cannot become God. But as our God is the true God, He gives not only a physical healing but a perfect and complete healing to our spirit, soul and body. So “do not believe every spirit, but test the spirits to see whether they are from God” (1 John 4:1).
How does it work in physical healing is very important. Does this happen by the magical power which is not supported by the Bible? If so, it will bring slavery, not deliverance in the end. We should have a mental maturity to ascertain everything before accepting them. Only then we can hold on what is good. When we are not able to define clearly about what is wrong and what is right in the alternative medicines like yoga, we should practice the golden rule, “reject every kind of evil” Everything that does not come from faith is sin (Romans 14:23). So it is good to keep us away from any suspicious acts.

In the recent days, a new practice called ‘Christian Yoga’ is sprout out combined of the physical, breathing exercises and biblical meditation. The phrase “Christian yoga” itself is an oxymoron. Can we say of somebody that he is a Christian Hindu or a Hindu Christian? “Can both fresh water and salt water flow from the same spring?” (James 3:11). “A good tree cannot bear bad fruit, and a bad tree cannot bear good fruit” (Mathew. 7:18). So it is important to examine the roots of the stem of yoga.
“Proclaim the gospel…Heal the sick…” were the order of the commandments given to the twelve disciples (Mathew. 10:7,8). Spiritual health is more important than the concerns over physical health. “For physical training is of some value, but godliness has value for all things, holding promise for both the present life and the life to come” (1 Timothy 4:8).

Let the Bible be our Meditation; Prayer be our Exercise

According to Bible, meditation signifies the practice of contemplating how the revealed truths in the Bible are relevant to us and applying them to our life. The meditations of David were repeatedly mentioned throughout the Psalm.119. Since all Scripture is God-breathed (2 Timothy 3:16), they are surely worthy of our meditation.
God speaks to us through the scriptures; through prayer we have a personal relationship with Him. We know that even in the most difficult times, Daniel got down on his knees and prayed three times a day, giving thanks to his God. Prayer is the best exercise to state our problems to God and to get solutions.
As Paul determined, ‘if what I eat causes my brother or sister to fall into sin, I will never eat meat again, so that I will not cause them to fall (1 Corinthians 8:13)’, let us also be clear and live as an example to other believers and lead them to truth, without causing them to stumble.

Therefore, I urge you, brothers and sisters, in view of God’s mercy, to offer your bodies as a living sacrifice, holy and pleasing to God - this is your true and proper worship (Romans 12:1).

This website uses cookies to improve your experience while you navigate through the website. Out of these, the cookies that are categorized as necessary are stored on your browser as they are essential for the working of basic functionalities of the website. We also use third-party cookies that help us analyze and understand how you use this website. These cookies will be stored in your browser only with your consent. You also have the option to opt-out of these cookies. But opting out of some of these cookies may affect your browsing experience.
Necessary Always Enabled
Necessary cookies are absolutely essential for the website to function properly. This category only includes cookies that ensures basic functionalities and security features of the website. These cookies do not store any personal information.
Non-necessary
Any cookies that may not be particularly necessary for the website to function and is used specifically to collect user personal data via analytics, ads, other embedded contents are termed as non-necessary cookies. It is mandatory to procure user consent prior to running these cookies on your website.
SAVE & ACCEPT